I spontaneously decided to travel to London when I read about the film screening of "The Elephant Who  Loved Too Much" and about the presence of Benjamin, the Head Keeper of the rehabilitation center for orphaned elephants in Ithumba, Kenya. So I spent some days in London which were full of interesting experiences - most of them elephant-related.

In Mayfair, Curzon Street, the exclusive screening of the film "The elephant who loved too much" took place which tells the story of tiny elephant orphan Aisha and her relation to Daphne Sheldrick who took care for her.

Dr Dame Daphne Sheldrick is the founder of The David Sheldrick Wildlife Trust which is specialized in raising orphaned elephants in Kenya. She has been taking care for wild animals since many years when she was living in Tsavo with her husband David. She also developed a special milk formulation that baby elephants can cope with. Elephants do not tolerate cow's milk. They can even die from it. Therefore milk-dependant calves could never be hand-raised before the invention of this special formula.

After we had all taken our seats in the cinema, Rob Brandford, the director of The David Sheldrick Wildlife Trust UK, came on the stage and after welcoming the audience, he read for us a message from Dame Daphne. I have to add that the cinema event had been iniciated on that day as it was her 80th birthday. Dame Daphne was celebrating it in Nairobi with her family, but this film event in London was honouring her birthday, too, and her 80 years full of dedication to wildlife.

Then the film was shown. Aisha's story is really touching, as this little elephant loved Daphne so much that it died when Daphne was away for a while because of her daughter's marriage. This tragic story was embraced with beautiful photos of Daphne and this charming little elephant, and intermediate clips of Dame Daphne today, speaking of her relation to Aisha, but also speaking about the consequences of Aisha's death for a new approach on the upbringing of elephant orphans. 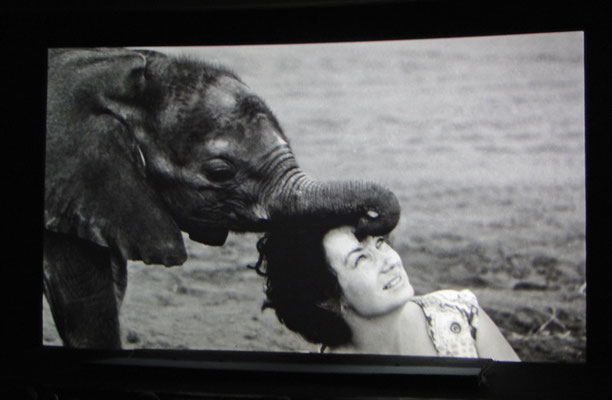 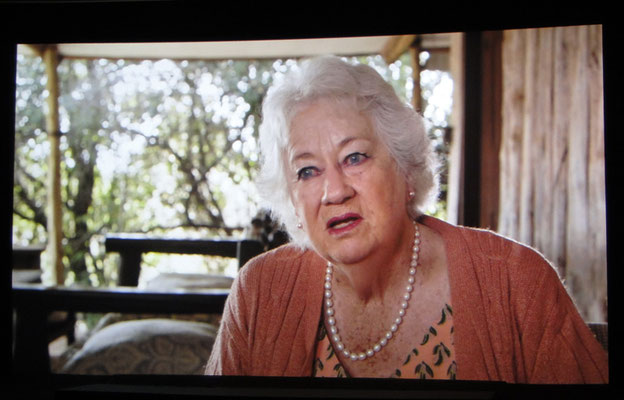 When the lights went on after this film, many of us were grabbing in their pockets for handkerchiefs.

Rob entered the stage again, this time in company with Katy Ashworth from BBC who also supports the David Sheldrick Wildlife Trust, and Benjamin Kyalo, Head Keeper of the Ithumba rehabilitation unit for the elephant orphans in Kenya. Although London must have been exciting for Benjamin, as it was his first visit to Europe at all, he was calm and relaxed on the stage, as he usually is with his elephants in Ithumba as well. He was there for a Q&A session - and there were a lot of questions from the audience. He was telling inspiring stories about his time in the bush with the elephants, - everybody listening closely. The essence of his attitude to elephants, wildlife and his profession was obvious in his words 'I love my job.'

After a long applause we were all gathering in the cinema bar.

There we could meet Benjamin, and I think he was happy to see several faces he already knew from people who had visited Ithumba already, and we were likewise. It was good being able to ask Benjamin urgent questions about certain elephants. Moreover, it was wonderful to gather with some Facebook friends whom I met in person for the first time. We were all happy to be in the company of likeminded people who love elephants and are dedicated to help them. 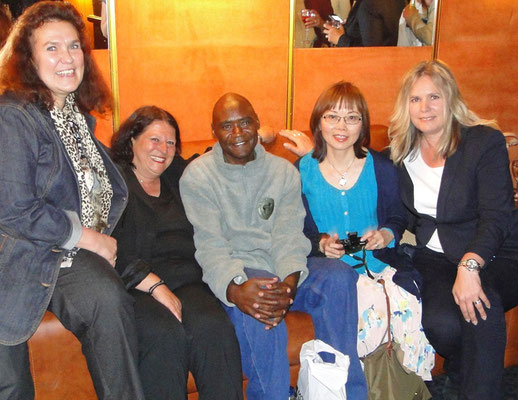 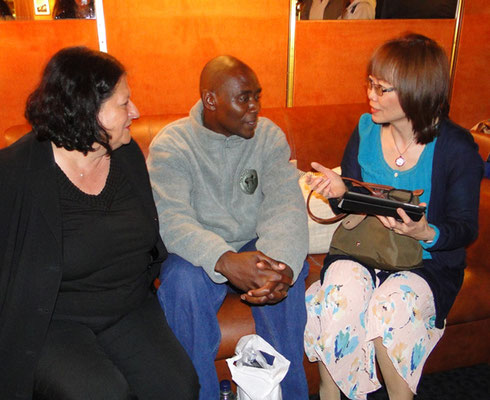 It was a very touching and inspiring evening!

At the same time there was even another elephant attraction in London: A special exhibition about mammoths in the Natural History Museum. It was very interesting to see illustrations about the development of the many elephant species who lived on earth before our time.

Elephants are a species which had been living, in many forms, on our planet for thousands and thousands of  years - and now we humans are about to kill the rest of the living few elephant species on earth within a wink of a moment's time.

The exhibition showed a complete mammoth skeleton - and a complete mammoth baby mummy. It is the only and best conserved mammoth ever found, and it is quite a feeling to be able to still see the hair and the little trunk and the ears of this baby 42,000 years after it had been living on this earth. The baby had been named Lyuba by scientists. 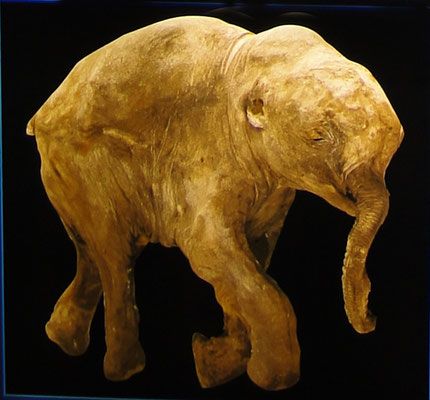 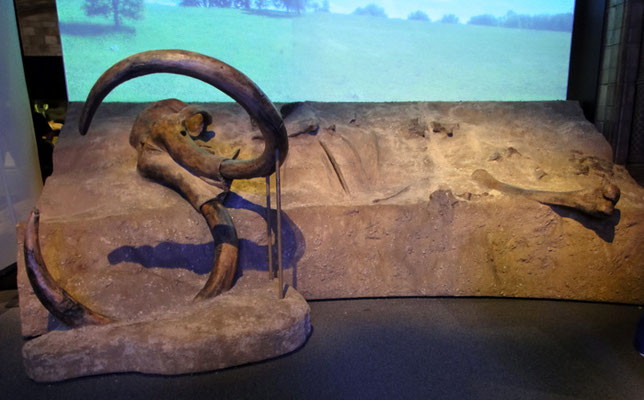 I also intended to see the Ivory House which I had recently heard of. Ivory House is a warehouse, mainly built for the ivory trade in 1858. The UK ivory trade at that time was at its century's peak with nearly 200 tons of ivory which covered its huge floors annually. (In 19th century up to 500 t have been imported to the UK each year.) The building was restored in 1973 and nowadays houses high-end luxury apartments and a mixture of shops and restaurants.

The house in St. Katharine Docks can be seen from afar when entering the dock area. First of all, the ships and boats lying in this dock caught my attention. 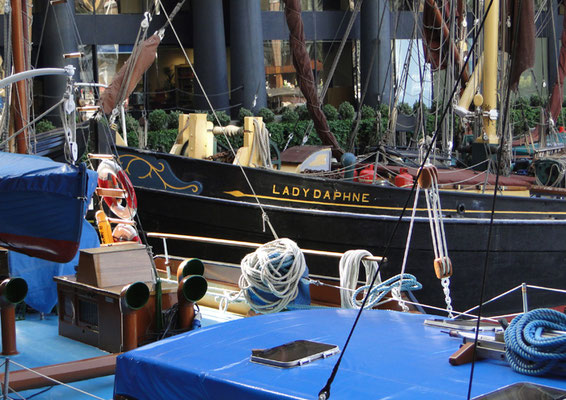 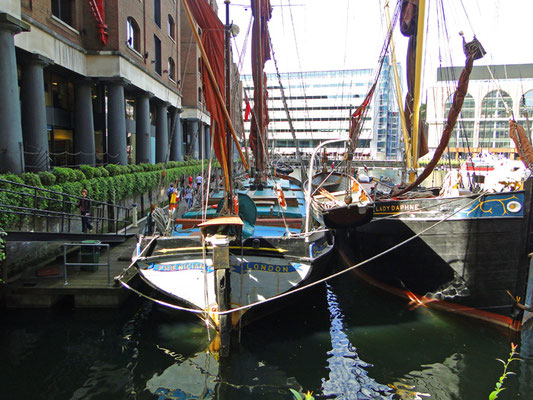 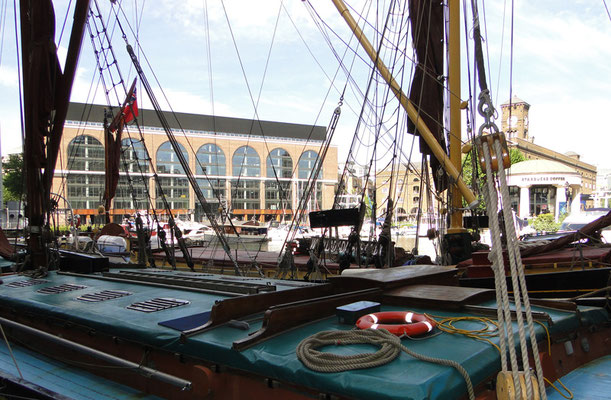 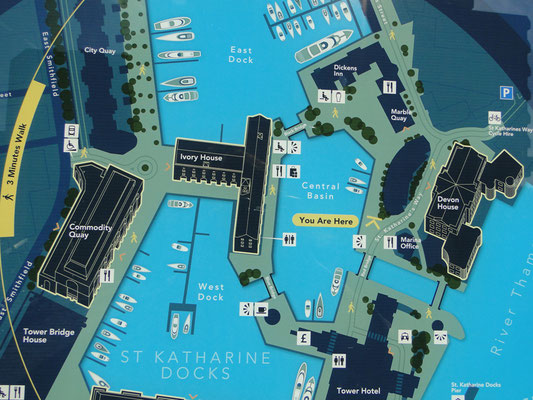 After finally making one's way around the dock, one could have a better look at Ivory House. It was a surprise that it was not only beleaguered by luxury motor boats but also by something that looked like a royal barge! Indeed the sign told us that the name of the boat is Gloriana, and it was the Queen's rowbarge. 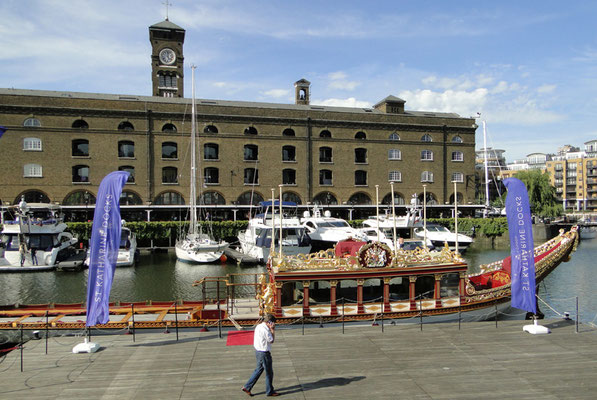 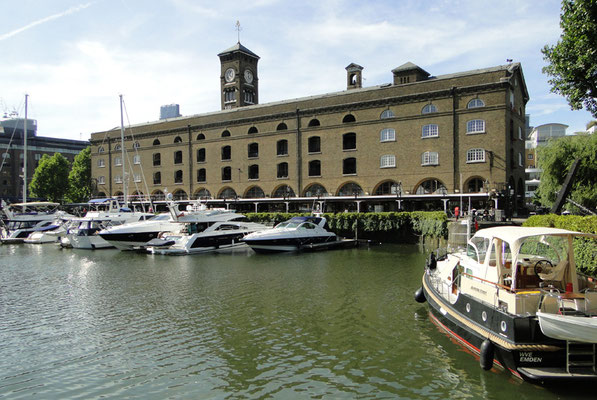 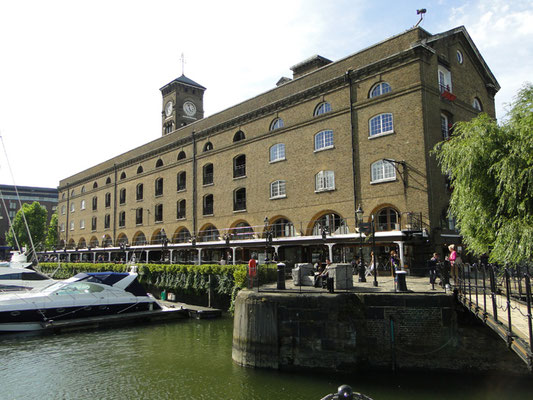 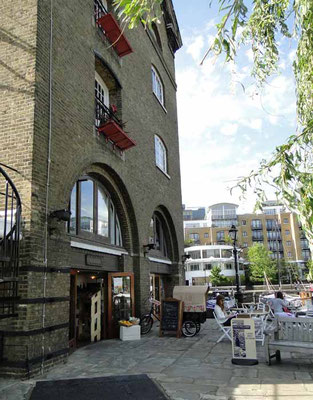 One of the small cafés of Ivory House - ideal for having afternoon tea there. 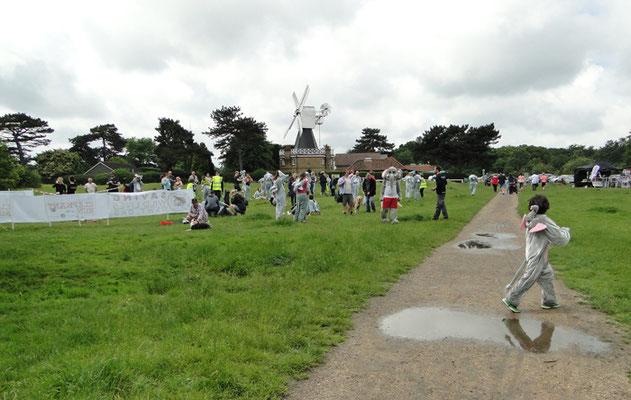 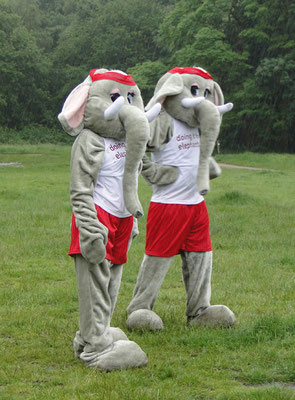 A day in Wimbledon, and again, for elephants.

At the windmill in Wimbledon, the 'Enormous Elephant Run' took place, organized by The David Sheldrick Wildlife Trust UK, and again Benjamin would take part in this event. It was a big fundraising event, and Claudia and me had offered our help to the Trust. After arrival, we were familiarized with our job in the baggage drop tent and introduced ourselves to Barbara, the 3rd lady in our team. 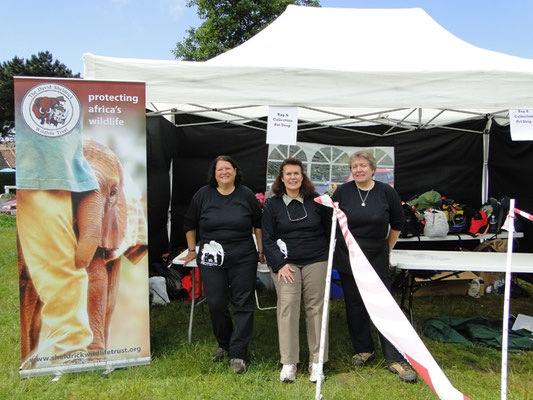 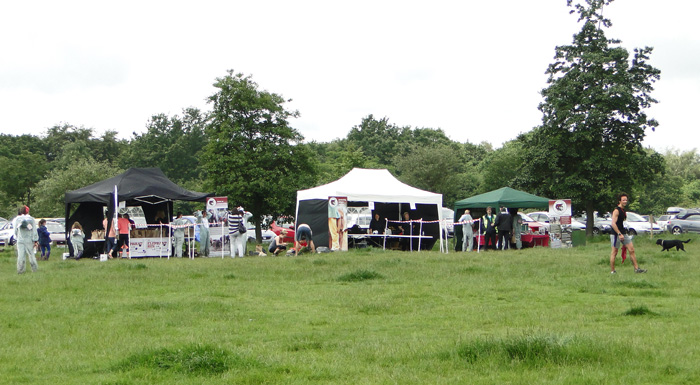 While we prepared everything, rain started to pour down like a river from sky. I was really sorry for the runners because they would become soaked wet, and the lawn slowly turned to something like a shallow lake. 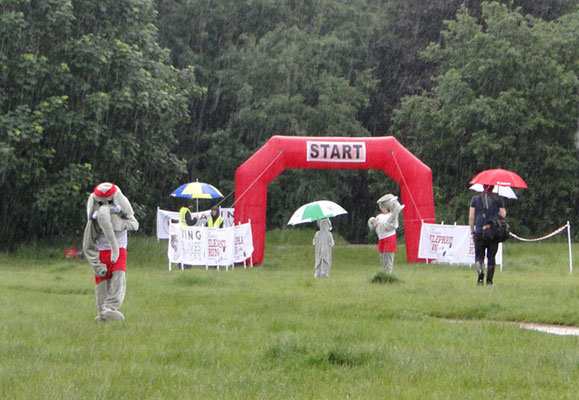 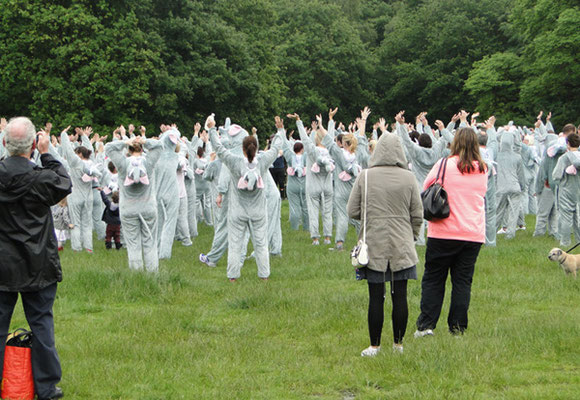 Nevertheless, the mascots and the runners stayed tough and dressed in their elephants suits in a good mood. I really admired them because I found the weather horrible. Luckily, however, the rain became lighter and lighter and finally stopped - just in time for the warming-up of the runners! Then the countdown started for the first runners who did the 10 km run, second were those for the 5 km run. 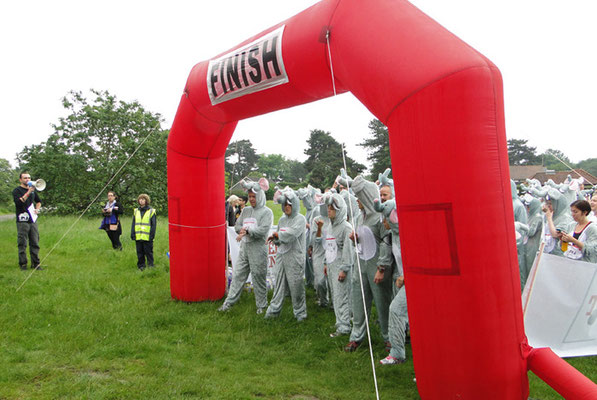 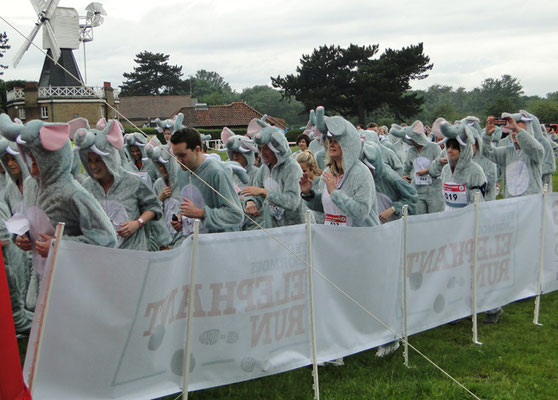 Unbelievably, the sun came out, and the runners could even enjoy their rounds, applauded and cheered by their family and friends. 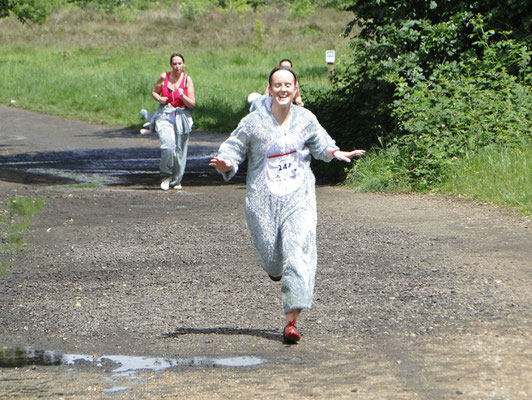 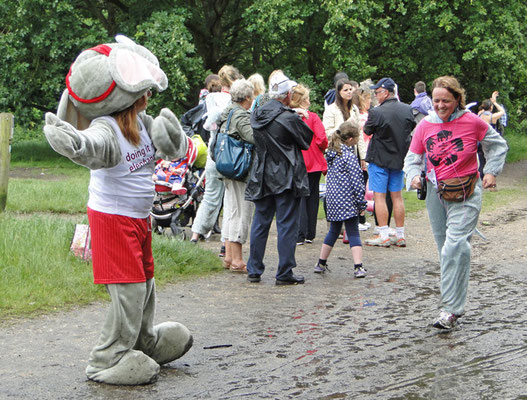 'Doing it for elephants!'

But sure all of them were even more happy when they reached the finish where they received congratulations, a medal, some water - and a banana! I was especially delighted by a man standing by the finish line who greeted every runner with a firmly pronounced 'well done!'. I could not have agreed more.

Also Benjamin made his run and was greeted happily. But he also admitted that although he was enjoying himself he was  already longing for his elephants in Kenya and would be happy to return home soon. 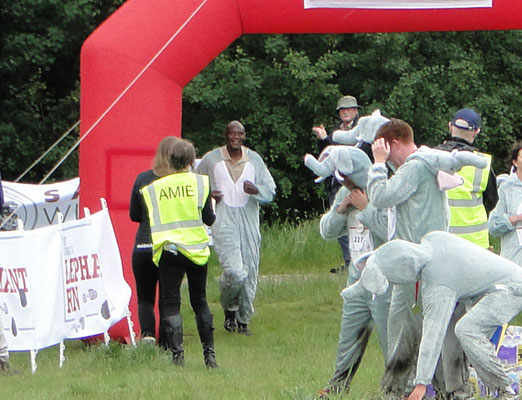 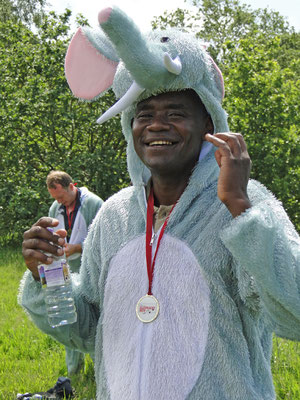 In the end, Rob and Amie gave a big thank you to all the (many!) volunteers. It had really been a great event - it was big fun to see so many motivated people who were aimed at helping elephants and who had a lot of  fun in doing so.

So in the end, my stay in London had been a very nice and remarkable one with so many interesting, different experiences.