Global March for Elephants and Rhinos

The date of the GMFER event in Munich was the premiere of the  Elephant of Light created by Christian Felix according to a model done by the Munich sculptor and painter Peter Irberseder. The work on the elephant took Christian hundreds of hours, soldering several thousands of LEDs and programming the electric circuits. The  Elephant of Light was ready just in time for the Global March!

As our arrival at Richard-Strauss-Brunnen in the pedestrian area of central Munich was a little delayed, the elephant had to be mounted as quickly as possible, however, also as careful as possible. It was not an option to allow anything to get broken now! 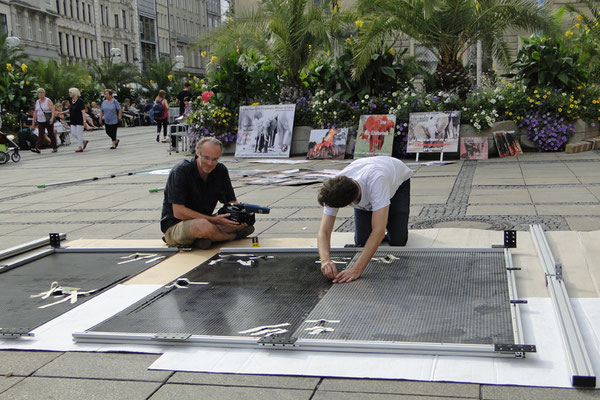 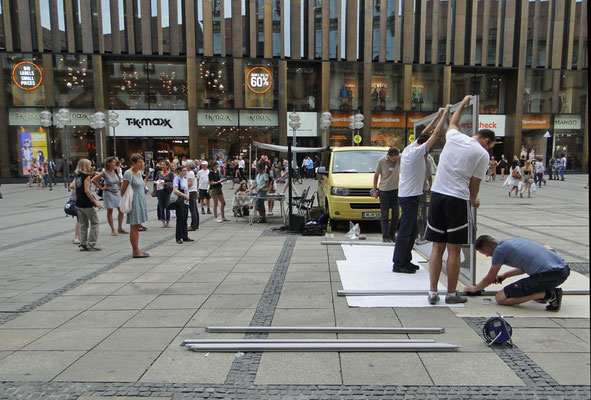 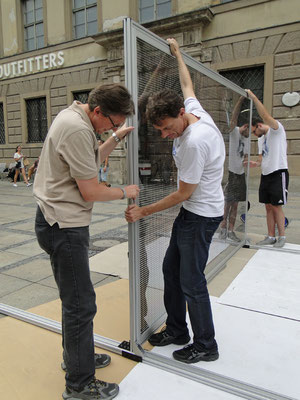 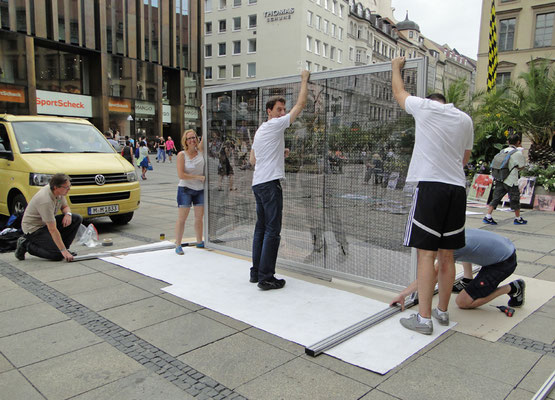 Spectators and a reporter from a Bavarian TV station were already waiting to see the elephant. And finally, with the sound of drums and a gunshot the elephant began to glow.

Our friend Viktor of Animals United took over the part at the microphone and informed passers-by and animated them to come to us and get more information details and to sign our petition. By the way, if you want to sign, too, here is the petition: Germany, stop the import of hunting trophies of protected animal species! 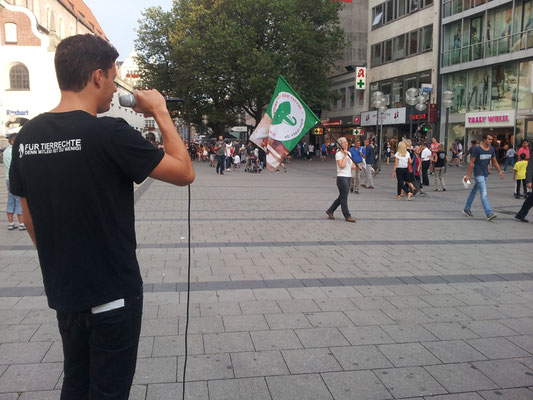 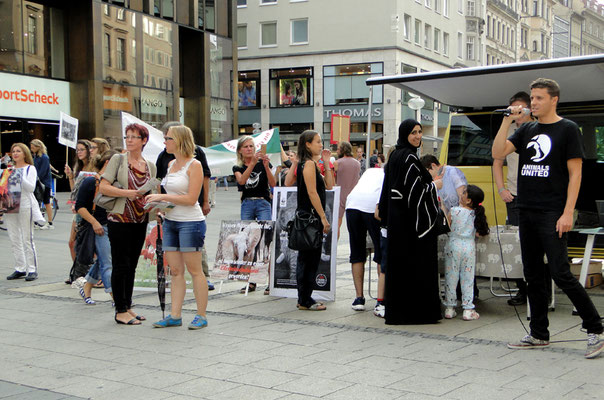 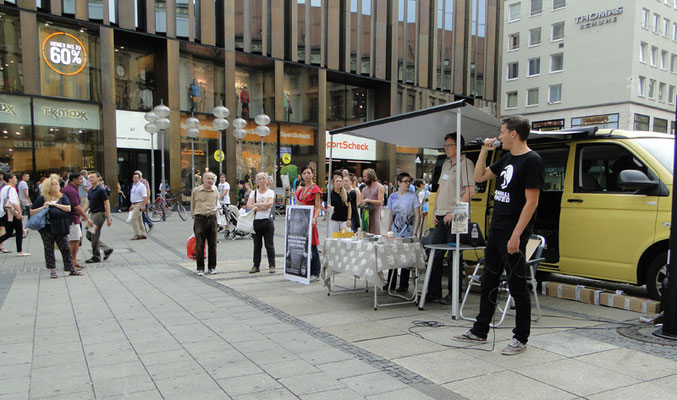 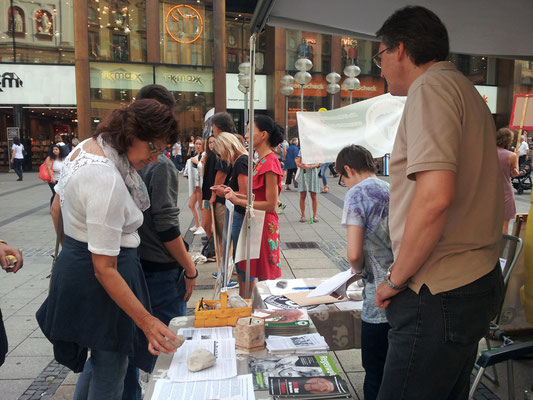 People passing by could not avoid to take notice of us! 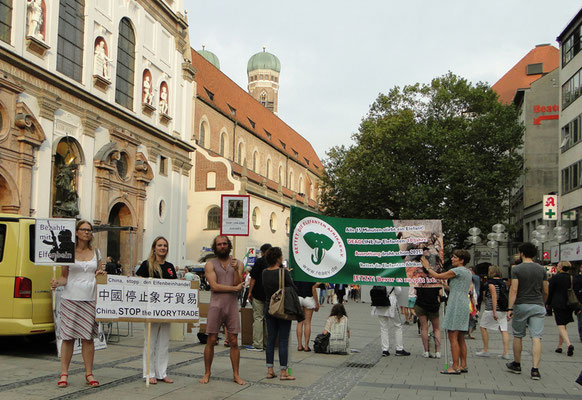 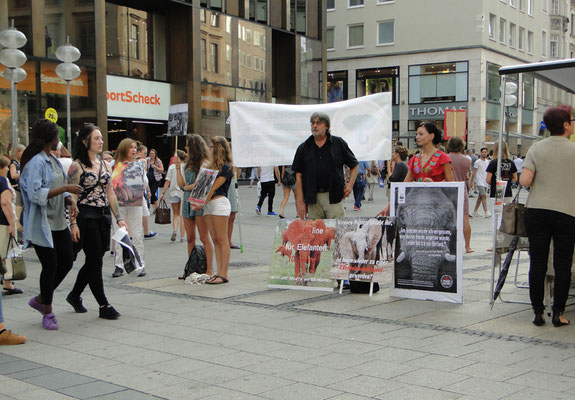 The TV reporter interviewed Christian serveral times and asked him about his artwork, the Elephant of Light. 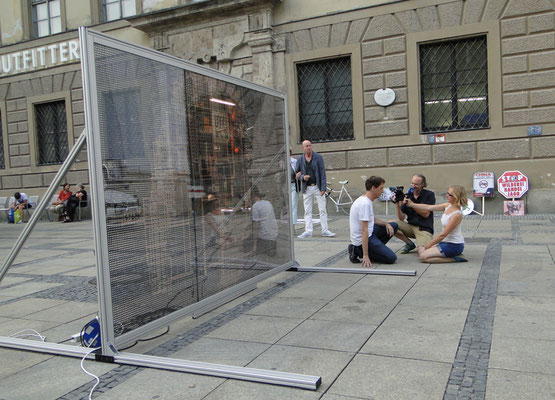 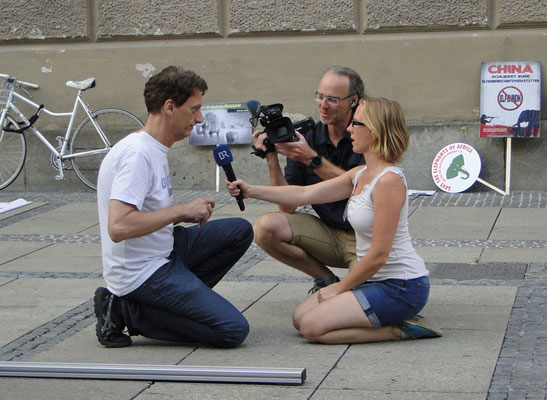 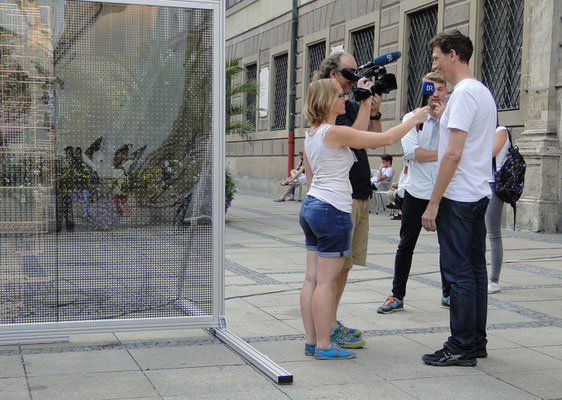 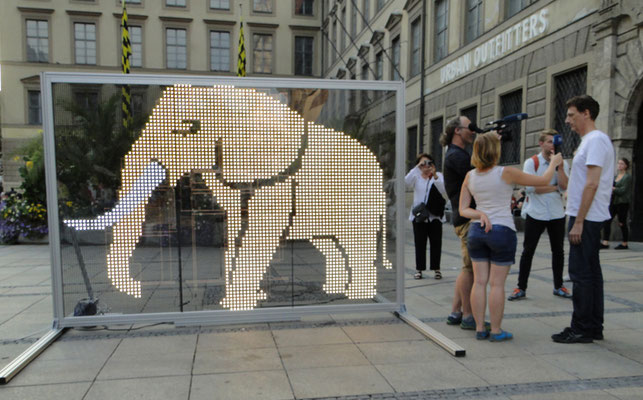 The result of the interview can be viewed HERE.  It was on TV the next evening.

The darker it grew the more impressive was the Elephant of Light. In each motion sequence, at first, the elephant appears in bright white light. Then, its tusk starts to turn red. Red like blood. Blood that flows when poachers kill an elephant. Almost at the same time when the tusk is finally completely red, the elephant is calling for help - by words appearing on its body. HELP US! The body vanishes, and only the red tusk remains - the only thing that poachers require from the whole dead elephant. Again the dying elephant cries for help - HELP US! - until it completely vanishes into the dark.

More about the Elephant of Light : HERE  (Website  in German language only) 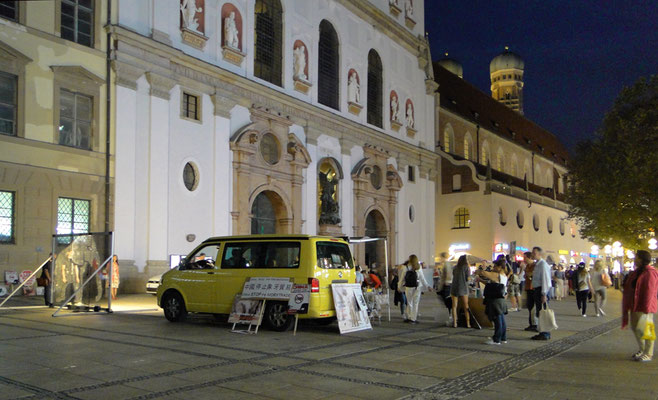 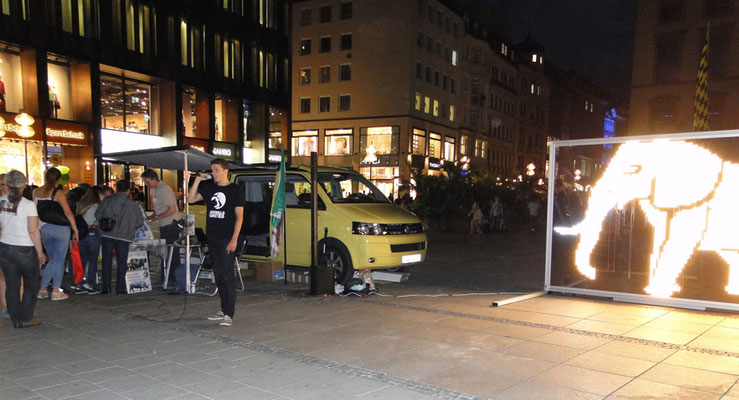 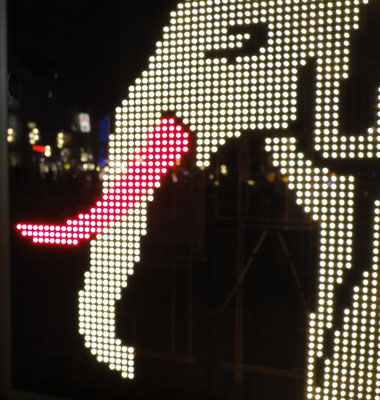 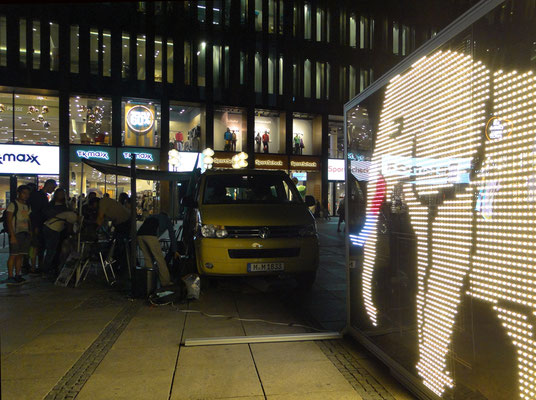 Busy times at our stand... On the end of the day we had received more than 250 new signatures on the petition, a full donation box - and we hope we could inform a lot more people of what is going on with elephants and rhinos. 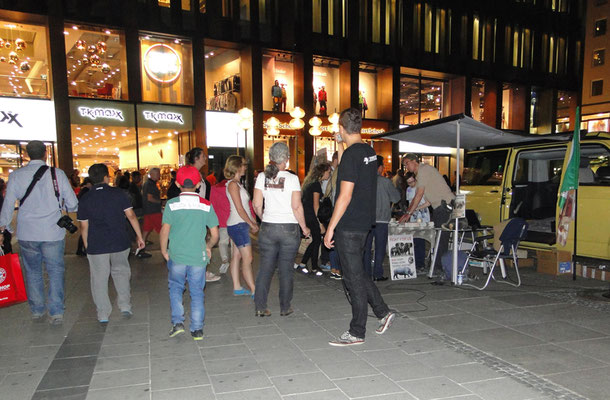 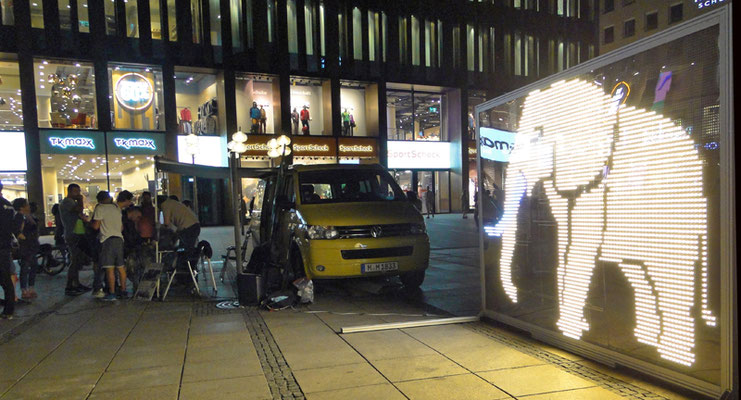 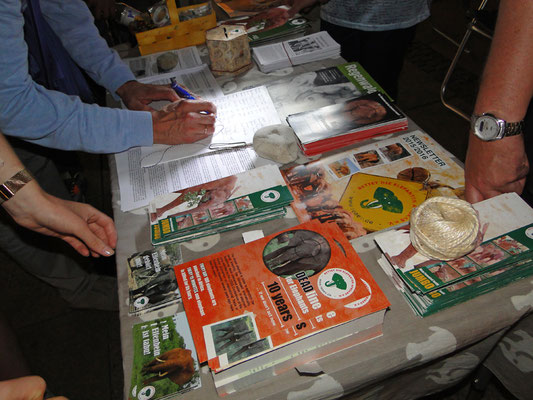 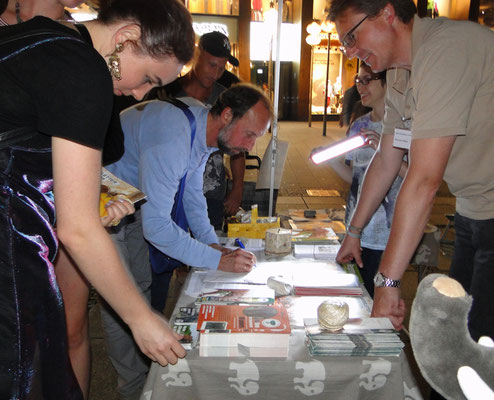 But there was some time for fun, too! 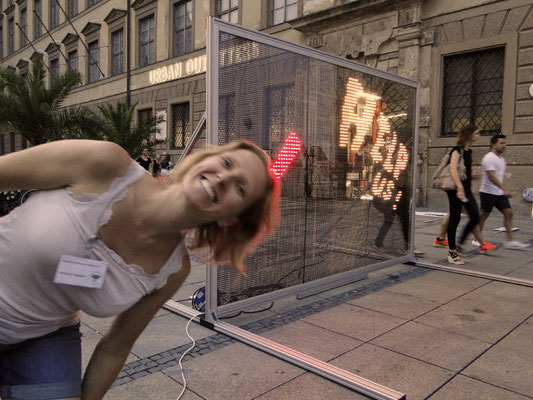 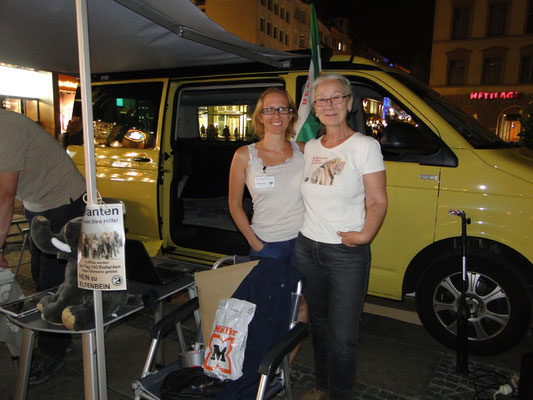 One final photo of the core team of this demonstration event:

Our staff at the information stand, our speaker, our experts for the construction and installation of the Elephant of Light, organizers, and last but not least: Christian, the creator of the phantastic Elephant of Light.

Not on this photo, but nevertheless crucial for our event: Animal fighters some of whom came a long way to Munich and patiently held placards and banners and waved flags and distributed leaflets...

All of you made the event a success for elephants. Heartfelt thanks to all of you!!!

More special thanks to following NGOs that supported us either by their presence during the demonstration or virtually - or both: